Why was a fort built in Stamford?

For most of the Revolutionary War, the British were in control of Long Island and New York. It took just an hour to sail across Long Island Sound so raids on the people of Stamford and surrounding areas were a constant threat. Many of these raids were for horses and oxen, which were needed for transportation of men and war material, and cattle, sheep and pigs, which were needed to feed the British troops. In other raids, the British set alight and burned coastal towns including Norwalk, Danbury, Fairfield and New London.

The civilian population appealed repeatedly to Governor Trumbull for protection. After a particularly serious raid on Darien by supporters of the British, the Governor and Council of Safety decided on August 31st 1781 to erect a permanent fortification to defend the Stamford – Greenwich area from attack.

Who built the fort and how?

Earlier, a brigade was formed under General David Waterbury by drafting soldiers from the militias of various Connecticut towns and taking enlistments.  The brigade served under General George Washington at Phillipsburg, N.Y. where they saw action against the British. Later Washington’s forces marched southward , eventually to engage the forces of Lord Cornwallis at Yorktown, Virginia in 1781. The troops returned to Fairfield County.

Under the direction of General Waterbury,  the troops began construction of the fort on October 4th 1781. The site chosen was close to the Mianus River which provided water for the fort and far enough from the coastline which the British controlled. Soldiers had a clear view all the way to Long Island Sound because no trees blocked the view at that time

First the men built four large square earthworks, called redoubts, one at each corner of the garrison using only spades and axes. By November 4th, they had completed most of this heavy earth moving and they proceeded to work on the interior portions of the fort. The four square earthworks were connected by lines of wooden barracks, which housed the troops and also formed the fort walls. Construction was completed in early December – just two months after the work had begun. In the 1960’s, General Waterbury’s Orderly Book was found. It contains his construction orders and it presents a vivid picture of daily camp life in Stamford during the Revolution.

With the fort completed, General Waterbury proceeded to secure the town and surrounding areas against further raids.

After the Revolutionary War

On September 3, 1783 the formal Treaty of Peace was signed and America was now  independent. With the revolution at an end, the Fort was considered surplus property and the State of Connecticut, in need of revenue, lost little time in selling off the property. 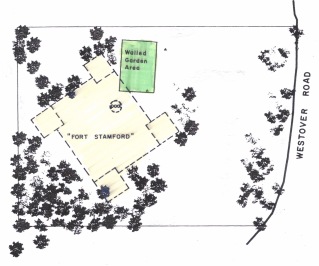 The earthen mounds are still visible to the south-east and west of the formal walled garden (now called the Goodbody Garden). The map shows how the fort (in yellow) was situated relative to the walled garden (in green) .

A stone marker dedicated by the Stamford chapter of the Daughters of the American Revolution (D.A.R) was erected on September 14, 1926.

Another marker (see next picture) was laid at the time of the Bicentennial Celebrations in 1976,  with historical details.

A tree dating back to the Revolutionary Days still stands to the west of the formal garden. The picture below was taken in winter – the tree is still very much alive and is now over 250 years old.

When homes were built in the 1970s on land surrounding the fort, streets were named for Revolutionary War heroes including General David Waterbury, Lt. Col. Samuel Canfield and Rev. Dr. James Cogswell, the fort surgeon.